What type of surveying?

Oregon DOT Uses Technology to Keep up with Progressive Contractors

In 2016, construction inspectors at the Oregon Department of Transportation (ODOT) had a problem, but in a way it was a good problem. “A lot of our contractors are using machine control now on our projects, a lot more than just five years ago,” explains ODOT Construction Automation Surveyor Chris Pucci. “That’s good, of course, because it’s efficient. But it also means that contractors are no longer necessarily setting stakes on projects. So our inspectors had no way to check progress without calling in a survey crew, and we don’t have a lot of extra surveyors.” ODOT wasn’t con - cerned that contractors were trying to cheat. But “we had a few problems when inspecting stake - less projects,” notes Pucci. “On one job, for example, working with a really good contractor who’s usually topnotch, somehow the model was changed on a section of concrete roadway—we’re not sure how that hap - pened. Without stakes to check, inspectors couldn’t check work against the original model, and a problem with the super elevations wasn’t discovered until after concrete was poured, and work worth tens of thousands of dollars had to be torn out.” 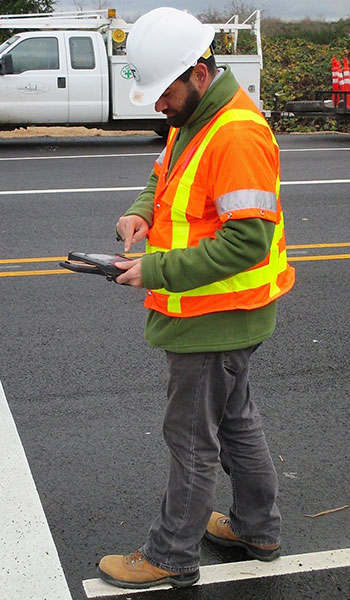