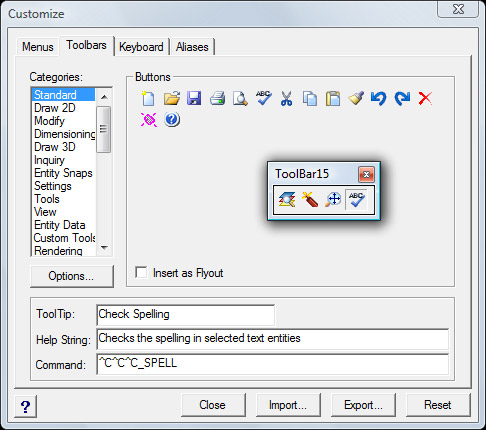 Powered by Autodesk Technology™ means that inside MicroSurvey embeddedCAD is the same engine that powers other Autodesk products.

Any training you have taken for AutoCAD is DIRECTLY applicable to the usage of embeddedCAD. Any process and workflow tools you utilize will still function as intended. All projects, reference files and objects you have created in the past will work exactly the same.

This is simply the most elegant solution. 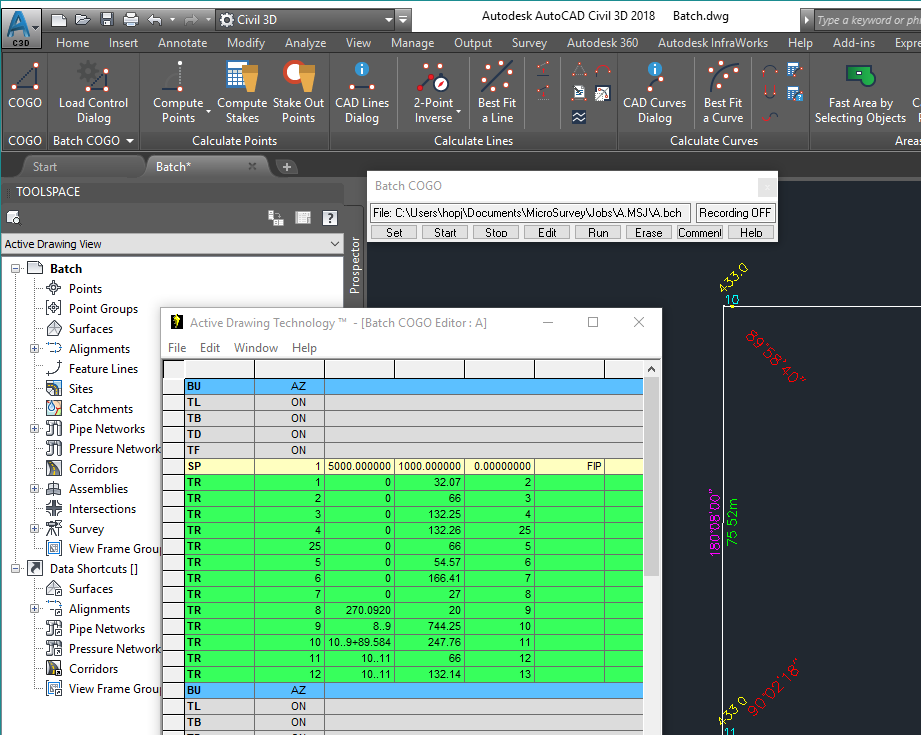 Record all of your COGO entries with Batch and replay as desired. MicroSurvey embeddedCAD includes a powerful set of COGO functions. Our new Batch COGO capability is unmatched. Build as part of the Active Drawing Technology, it allows you to build complex COGO calculations in a spreadsheet and re-run them as necessary.

MicroSurvey embeddedCAD also includes command line COGO that you can use at any time by just typing "COGO" at the prompt. You immediately enter a familiar style of entry that prompts for point numbers, bearings, distances, and solve points. Intersections are computed by just leaving unknowns blank, and the program automatically determines what type of intersection you are trying to compute. Bearings, Distances, Point numbers can all be picked off the screen by selecting point labels or lines.

COGO commands are also available in a more graphical format. If you select a line or arc on the screen with no command running, you can immediately calculate new points. MicroSurvey embeddedCAD also allows you to compute without storing point numbers. The lines and arcs that you create can be instantly coordinated and numbered at a later time.

Helmerts Transformation.
With the Helmert’s Transformation, you are able to rotate, shift and scale up to 5000 points based upon a best fit solution using 2 to 500 pairs of common coordinate points, all with the execution of a single command! When more than two points are common in each system, redundancy exists and a Least Squares method is used to determine the optimum (best-fit) transformation parameters.

Coordinate Transformations.
Use the coordinate transformation function to easily transform your data from one system to another. UTM, 3TM, SPC (NAD27, NAD83, HARN) and hundreds of others are supported.

Other Tools.
A Proportioning function makes it easy to proportion distances along arcs or curves, to create equal line divisions and divisions based on ratios like dividing a line into 2 segments 1 segment at 2/3 of the overall distance and the other at 1/3.

Radial Inversing can be used to create radial field ties quickly and effectively. List the ties in a line table with the click of a button. 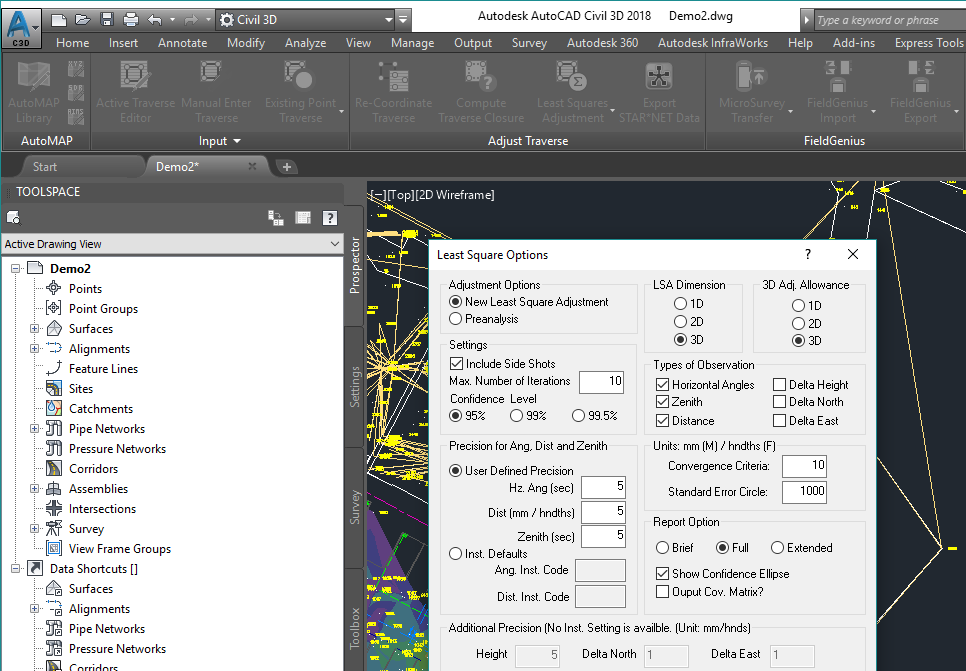 A full 3D least squares adjustment can be done if there is redundancy in your traverse network. It is fully integrated to directly read MicroSurvey traverse files, sort the observation data, compute adjusted coordinate values for all points (including sideshots) and update your drawing database. The program supports adjustment in 1, 2 or 3 dimensions and provides three levels of reporting, complete with statistical analysis.

This is just the tool you need for computing closed traverse networks that are not easily balanced using traditional methods. Integrated in the adjustment package is blunder detection, published instrument errors, graphical elipse display, reprocessing and network pre-analysis. 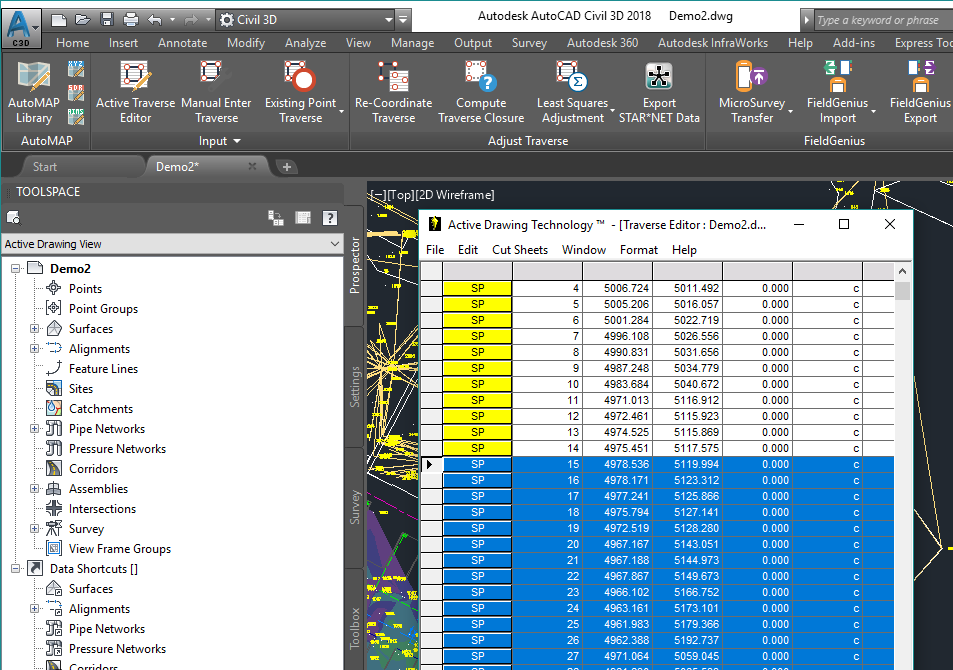 Active Traverse Editor
Verifying and editing your raw data is now much faster and allows for painless correction with traverse data represented in a smart, spreadsheet-like editor that has incredible drag and drop capabilities. The Active Traverse Editor allows you to not only work with your raw data at any point in the traverse quickly, but it also allows customization of the views available and opens multiple traverse data sets simultaneously. Errors in your traverse data are amazingly easy to spot and fix.

Active Batch COGO
Batch COGO is a system for data entry and calculation that allows you to browse an entire COGO entry history, quickly identify errors and easily make changes. At any point COGO entries can be edited and reprocessed with the correction immediately reflected in the drawing. What's more, the interface is built with smart tags for data types like Traverse, Bearing-bearing intersection, Distance-distance intersection and more. 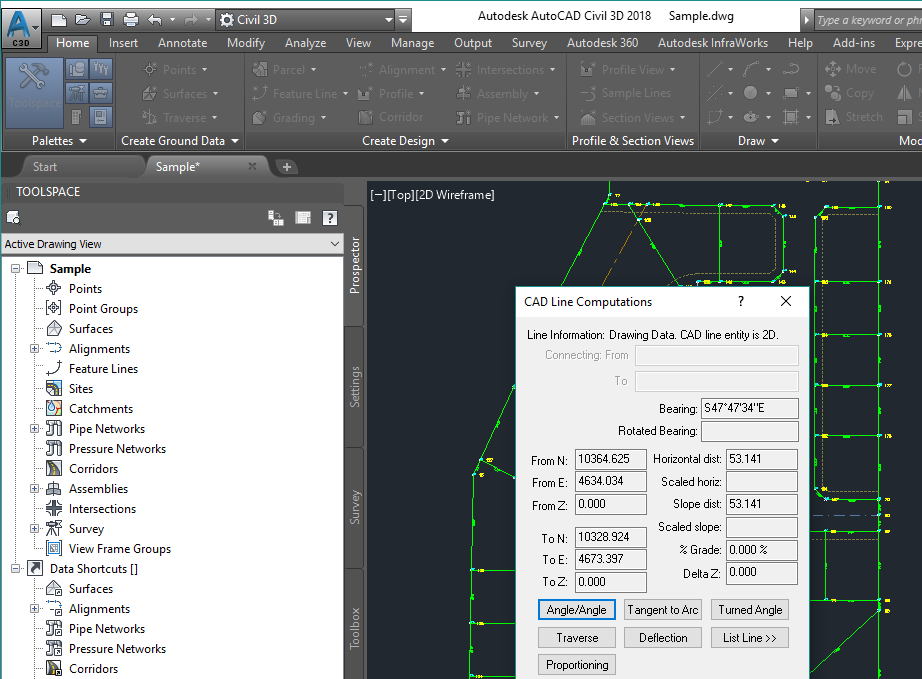 Picking on objects in the drawing will automatically invoke commands based on the objects that are picked. Picking on a line for example will bring up the CAD Lines dialog where you review the starting and end points of the line, slope, change in elevation and more.

Other Smart objects that have this type of functionality are curves, text and points. Picking on a point will start the Active Point Editor and allow you to browse the entire coordinate database. MicroSurvey makes it easy to get at the information you need by simply picking on the objects in the drawing. What could be easier? 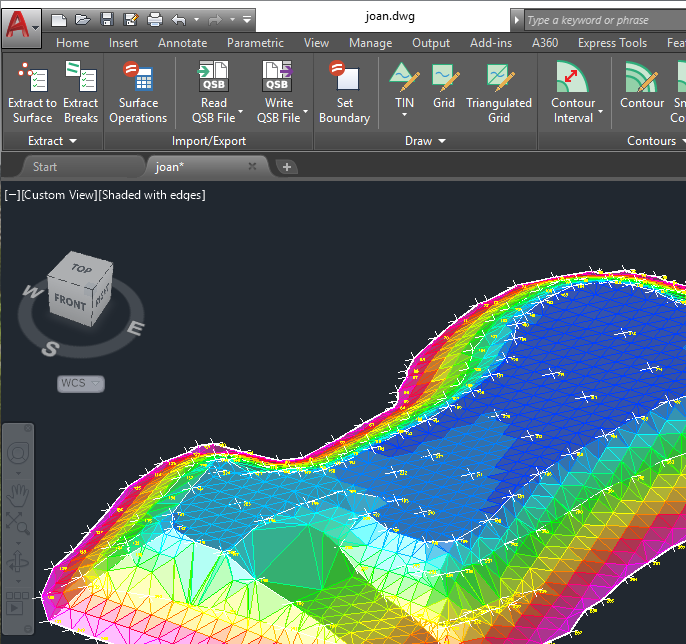 As part of a complete package, the system creates surface models at lightning speed. With one of the fastest modeling engines in the business, you can manipulate surfaces by adding or removing points, working with breaklines, and creating boundaries. We stopped testing triangulation speed when it broke through the 100,000 points per second level.

Volumes are computed quickly and easily between multiple surfaces, or between a surface and a specific elevation. Multiple area volumes can be computed simultaneously by defining boundaries. These act like a "cookie cutter" to slice vertically through surfaces to get specific volumes.

Visualization in MicroSurvey embeddedCAD is unmatched with fast 3D rendered views of TINS, Grids, and Triangulated Grids (a more accurate method of representing a surface). Cross sections or Profiles are just a click away. 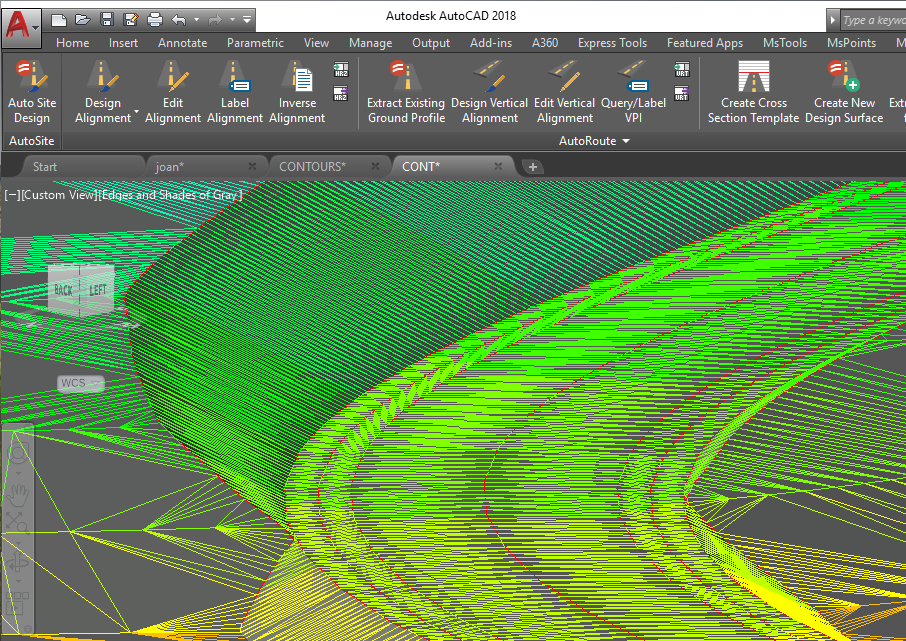 Describing all the functionality in this area is difficult, because there is so much! Our Road Design Wizard makes creating a 3D road along a horizontal and vertical alignment a snap. Creating templates is made easy with our graphical template editor. Multiple passes can be made down a road with various templates to create a multi-level surface.

Site design for ponds, building sites, canals, ditches, or slopes is as easy as 1-2-3. Select your border polylines and apply slopes. Our system automatically calculates all the intersections and creates new surfaces in one command. Volumes fall right out automatically once you have the site.

Tools are available to slice the surface along spaced cross sections and plot all the results automatically.

We maintain over twelve hours of training movies on our website; nearly 150 movies explain all kinds of functionality.

To quote Professional Surveyor Magazine:"If you forget how to do something, you do not have to run to the office guru or spend hours going through the manual trying to find out how to do what you want to do. You just go to the movies - the ones in the Help files, that is…you have access to [139] neatly arranged movies that tell and show you exactly what you have to do."

MicroSurvey inCAD ships with six tutorials directly in the help file that make it easy to learn.  Also included are several example projects to get you started. 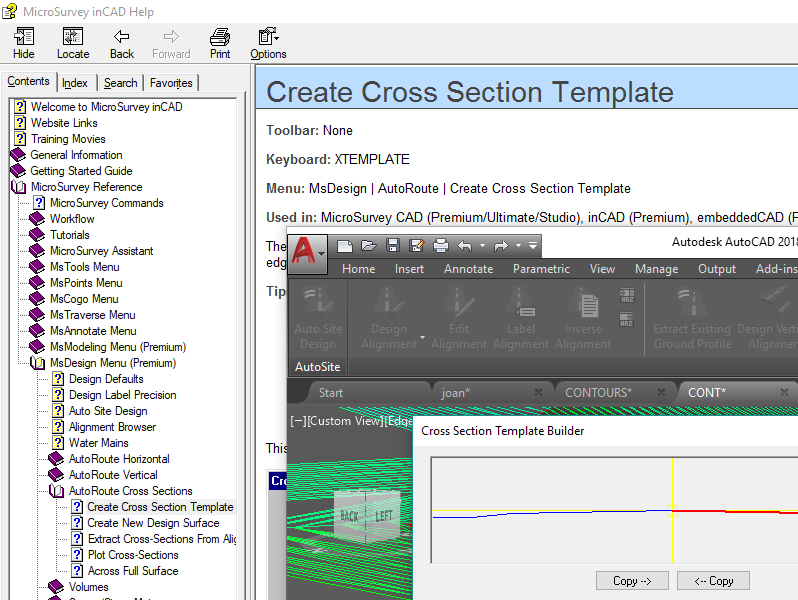 Also included is the most modern help system available with a fully indexed, linked help file that exactly models the layout of the pulldown menus.